The Cognitive Radio part of the LOG-a-TEC testbed consists of several clusters of permanently mounted VESNA sensor nodes that are dedicated to experimentation with spectrum sensing and radio communications within wireless sensor networks. Each sensor node in these clusters is equipped with multiple reconfigurable radio interfaces that can be used in various modes. A license from the local regulator allows for experimentation in TV whitespaces as well as frequency bands for unlicensed devices.

Testbed is remotely accessible over the Internet and uses a dedicated, wireless management network to control individual sensor nodes in a cluster. Different approaches can be used to perform experiments, depending on the latency requirements and complexity of experimental scenarios: from high-level control using Python or graphical network stack composition to reprogramming the nodes with native applications. Radio propagation modeling tools can be used as well to plan the experiments.

In addition to permanently mounted nodes, several kinds of mobile nodes or instruments can be added to the testbed in special cases and after previous agreement.

There is 79 sensor nodes mounted at the campus of the Jožef Stefan Institute in Ljubljana, Slovenia. They cover approximately 3000 m2 of in-door and out-door space and are placed on light poles 3.5 m above the ground and on the surrounding buildings at heights from 2.0 to 9.3 m. To enable experiments in indoor as well as in mixed indoor/outdoor scenarios, the testbed is extended in an indoor environment with additional 20 UWB devices and one LPWA device. These are deployed on the second and third floors of the 28.4 m by 16.6 m building.

Architecturally, we consider hybrid testbed devices with two separate functional blocks represented by the infrastructure node and the target node. Therefore, a generic infrastructure node that can be combined with various target nodes. The infrastructure node is a custom designed single board computer based on the BeagleCore module running the Debian GNU/Linux operating system. The target node is a custom VESNA (VErsatile platform for Sensor Network Applications) device with an ARM Cortex-M3 micro controller application module and dedicated experimentation transceivers. As seen in the table above, devices are equipped with different wireless radio technology - you can read more about them in the hardware section.

Infrastructure nodes use 5GHz WiFi to avoid interference with experimental network and they are directly accessible from the Internet using IPv6. With server, which acts like a controller, we can automate various experiments and test different protocols. Nodes at IJS campus are running Contiki-NG, a small open source operating system for resource-constrained devices which is great for developing and testing IPv6 wireless communications.

Logatec is a small city with approximately 10.000 inhabitants in the south-west of Slovenia. Three sensor node clusters cover approximately 350.000 m2 of out-door public space in the city center and an industrial zone using a total of 52 sensor nodes on street lights and other public infrastructure: 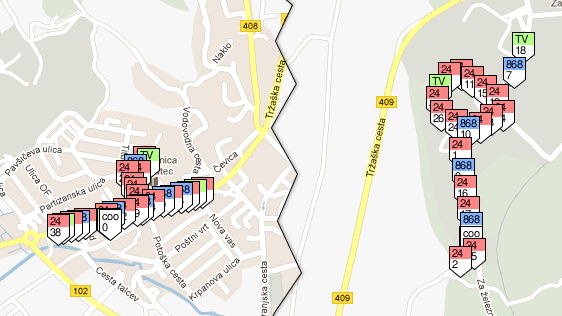 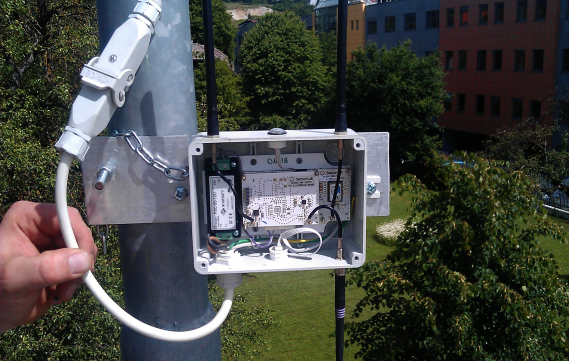 Nodes in the cluster are running the vesna-drivers firmware and use a dedicated, low-speed IEEE 802.15.4 management network (independent of the experimental radio hardware) for control and reprogramming. Each node is accessible from the Internet using a REST API and an application protocol similar to HTTP (ALH). 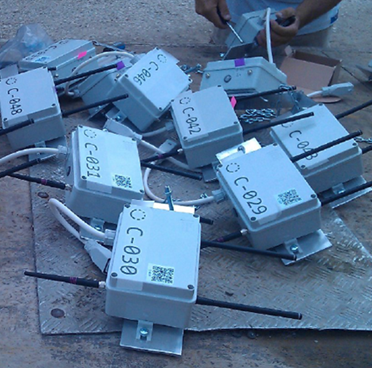 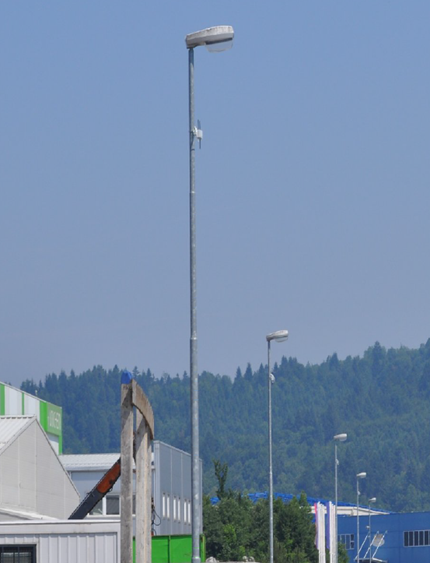 Additionally, a small number of software-defined radio nodes using the Ettus Reseach USRP N200 can be used in the test bed as needed. A Rohde & Schwarz SMBV100A vector signal generator and a FSV signal analyzer are available for on-site measurements.

The following is a list of the major software components of the LOG-a-TEC testbed.

The LOG-a-TEC testbed is a member of the Fed4FIRE federation of testbeds.

Other publications and tutorials

The following material is available for LOG-a-TEC.

Various experiments can be performed using the LOG-a-TEC infrastructure, for example: